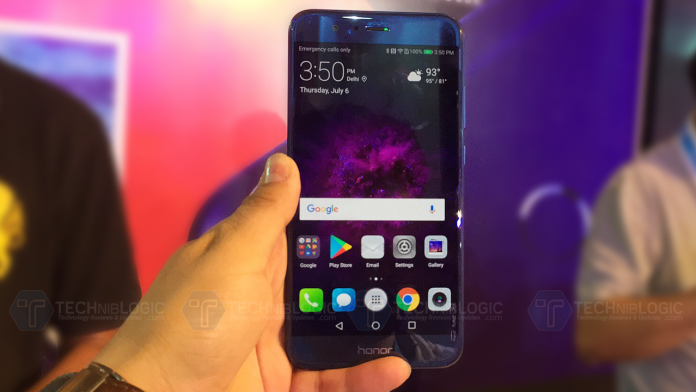 Huawei’s much-awaited smartphone, the Honor 8 Pro has launched in India at price of Rs 29,999. Indian consumers can now get their hands on the swag phone exclusive through Amazon.in. The device is created with an aircraft grand aluminium alloy framed design. It’s available in four attractive colours Black, White, Blue and Gold in the market.

As far as we know, the honor 8 Pro is packing a 2.4 GHz Kirin 960 Octa-core processor, which is backed by a Mali-G71 MP8 GPU. The device features a 6GB of RAM and 128GB of internal storage, which can be expandable up to 256 GB via micro-SD card. The device has a stunning 5.7-inch QHD display with a pixel resolution of 1440 x 2560 and an awesome 515 PPI of pixel density. Huawei has also added Corning Gorilla Glass 3 for extra protection. For photography Honor 8 Pro includes a 12MP rear camera with LED flash and a decent f/2.2 aperture. The front camera is an 8MP selfie shooter with and f/2.0 aperture. We also get different connectivity option which is normally seen on every device, no difference over there. The device also has some premium features such as USB Type-CD, DTS sound enhancement.

The Honor 8 Pro comes with an Android 7.0 Nougat with the latest EMUI 5.1 on top of it. The phone has a 3D fingerprint sensor, which has a super-fast unlock time. The device also supports NFC. The device also features They have also added a massive 4000mAh battery inside it.

For More information stay tuned and subscribed to our Website.

10 Reasons to Start a Business From Your Home