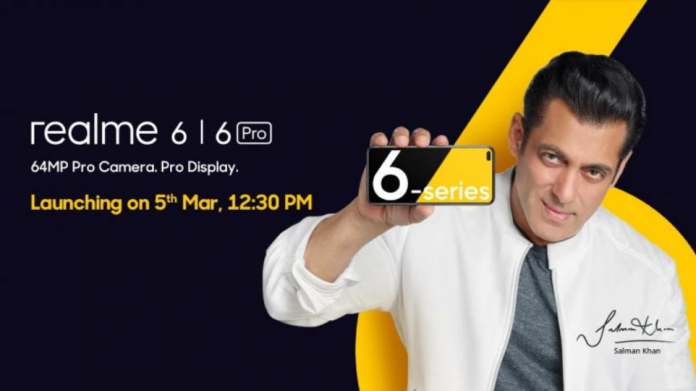 Realme, an offshoot of the Chinese Brand Oppo is all set to launch Realme 6 series smartphones which includes: Realme 6 and Realme 6Pro. The smartphone will be launched in India on March 5. Bollywood actor Salman Khan is the brand ambassador for the Realme 6 series.

The tweet posted by the brand clearly mentioned Salman Khan as the ambassador of @realmemobiles. The tweet also provided the information about the Realme 6 and Realme 6Pro and 64MP camera. Prior to the tweet, Realme India CEO Madhav Sheth shared a photograph of him and Salman Khan on Twitter, teasing the endorsement news. From both the tweets it is confirmed that either Realme 6 or Realme 6 Pro or both of them will be equipped with a 64MP camera. The teaser image carries a watermark that says ’64MP AI QUAD CAMERA-Shot on Realme 6 and the image also depicts a dual punch-hole setup on the display of a Realme 6 series phone held by the brand ambassador, Salman Khan.

Commenting on the partnership, Madhav Sheth, Vice President of realme and CEO of realme India, said: “What makes Salman Khan the best choice for us it that he enjoys a massive appeal across various regions and demographic profiles of India. That brings immense value to us as one of the unique selling propositions of our brand lies in making cutting edge tec

In one of the tweets by the CEO, there was a hashtag used names as ‘ProDisplay’  that signifies that the Realme 6 series smartphones will come with pro display as per the rumors it could be the 90Hz display that we have seen on the Realme X2 Pro and Realme X50 Pro 5G. Recently, the Realme 6 passed through the Wi-Fi Alliance certification and the IMDA database where it was spotted that the smartphone is powered by MediaTek Helio G90T processor and is backed up by a battery of 4300mAh.

However, we do not have much detailed information of these two smartphones. Stay Tuned to know more!!

If you run a logistics company, you know that the chances for one of the drivers to drive a truck without a trailer are...

Google's Flutter hit the scene in early 2017, and it's taken the mobile app development world by storm. This isn't just a framework —...

In the year 2020, a record number of business applications was submitted. According to Census data, the number of applications declined significantly from 4.5...

“Caps on interest rates and loan fees are the primary vehicle by which states protect consumers from predatory lending,” according to the National Consumer...

With the arrival of the festival season, preparations are in full swing. These are times when many of us start thinking about buying a...

What is the HODL Strategy? A Beginner’s Guide

There is one feature that distinguishes Bitcoin and crypto investment from all other asset classes: volatility. Bitcoin or any other crypto asset can change...