Soon after the ban of PUBG mobile, many players shifted to Among Us. Initially, it was played by many Indian streamers and from there, it gained huge popularity. Among Us is a multiplayer game that can be played with 10 people and all the players have to complete certain tasks and survive during emergencies. Among the 10 crewmates, there can either be 1, 2 or 3 imposters who cause obstacles and problems so that the other crewmates are unable to finish their tasks. Moreover, an imposter can even kill a crew member.

Multiplayer games are fun to play as you can play them with your friends. There is nothing that brings a bunch of friends together so that they can try and figure out who is the traitor. Among us is a social deduction game. Social deduction games are also known as traitor games or imposter games. If you are someone who likes to play such games or you are looking for an alternative for Among Us, then this article is for you. In this article, we have listed 5 Best Games Like Among Us.

Deceit is an action-filled, multiplayer first-person shooter game. This game is awesome as Among Us and it tests your instincts at trust and deception. In this game, you wake up in unknown surroundings (asylum) to the sound of the Game Master’s unfamiliar voice. You will also notice that you will be surrounded by five others just like you. Moreover, the third person in your group have been infected with a virus, and you have to strategies your escape.

2. Town of Salem- The Coven

If you are looking for a game that is as good as Among Us and consists of murder, accusations, deceit, and mob hysteria, then Town of Salem-The coven is the best game to download. In this particular game, you can witness around 7-15 players and the players are randomly divided into Town, Mafia, Serial Killers, Arsonists and Neutrals. So, if in case you come under the category of Town member (the good guys) you must track down the Mafia and other villains before they kill you. However, the toughest part of the game is that you don’t know who is a town member or who the villain is. Moreover, if you take over the role of a Serial Killer, you secretly murder town members in the cloak of night.

This is a mystery game that you can play online with your friends. In this game, you have to defend your village from the forces of evil or you will have to become a werewolf and hunt your friends. It is a multiplayer game for up to 16 players and you will have to use special abilities to uncover the roles of other players and convince your fellow players to work with you to win. 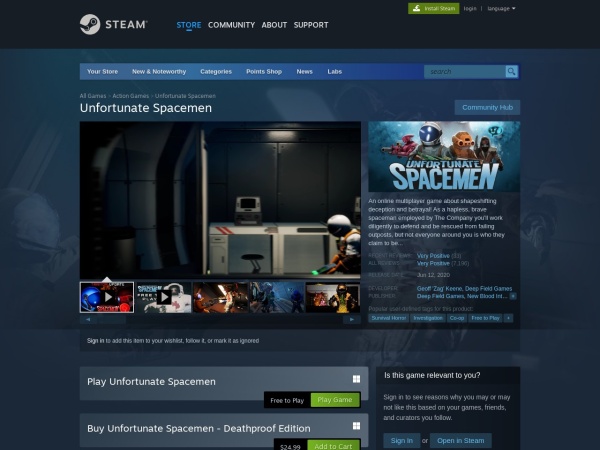 It is a co-op / multiplayer game. This game is all about Shape-shifting Space-Based Murder and Betrayal.  In this game, you will be a hapless yet brave spaceman employed by “The Company” and you will have to work diligently to defend and be rescued from failing outposts. However, you must remember that not everyone around you is who they claim to be and not everyone is your friend.

Just like all the other games mentioned in this article, the Enemy on Board Is also an amazing and exciting multiplayer game. It is a multiplayer (4v2) social deception game. In this particular game, 6 crew members try and figure out who among them are murderous shape-shifting aliens. In this game, you have to Detect, deceive, and destroy your way to victory. The only thing to remember while playing is that you cannot trust anyone.

In conclusion, all of these games provide a decent variety of themes and gameplay. I would suggest that you can try each one of them one by one and stick with the game which you think resonates the most with your playstyle. Among Us has definitely set up a benchmark when it comes to imposter games but do give these a try.