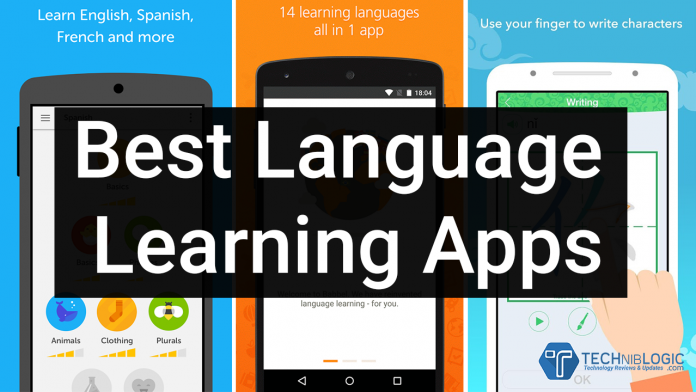 Language has always been an interesting subject in between travelers and multilingual. But in this rapidly changing banal life, the craze of language has gone a little bit amiss. Thankfully, the technological revolution has taken the world by a storm. There is literally an app for everything; maybe not for cat videos. But honestly, if you search out there, you’ll definitely find hundreds of apps.

Well, the discussion here is not about some hundred apps, but if you have to install one precise app for that unique work, you’ll have to look a list of unprecedented app that may or may not fulfill your requirements; terrifying isn’t it? So, to take your work further and push aside it to your limitless capability in languages. We are here with some best Language Learning Apps that are free and really amazing. The app is considered to be one of the best language learning apps out there, and trust us it is. We went through its features, and it was the simplest and minimalist experience ever. The training of any language starts from basics, and the fundamental learning is very important. So, the app has features like Voice playback, which will the speak every word that you learning.

The most amazing feature that we encountered with is the listening from the learner itself, which not just improve your memorizing capability but also improves your speaking ability. Simply because regurgitating words and speaking them is not what you call learning. The app has more than 50 foreign languages and developers are still working to add more. Duolingo promises that the app will always be free so if you see some adds please don’t get annoyed.

“Duolingo may hold the secret to the future of education.” —TIME Magazine Memrise is the rival app of Duolingo and features the same functionality as it. In our experience, we find the app useful in terms of understanding on languages. The app helps you remember words by showing respected pictures, which is basically the best technique to learn anything at all. The one key feature that makes this app different than others is the Video playback of the sentences which shows the exact pronunciation of the word from their native speakers.

The app has the very settle learning experience we have ever seen. It almost felt like playing a game, one and two mission every day and you’re a champion in the language The App feature 300+ courses, which is insane. You can also invite your friends to learn with and compete with them. The video playback feature is our personal favorite.

Babbel is an awesome app if you want to do a crash course in any language. The app basically visualizes you in almost everything. It has features like listening, speaking, writing, which sums up the app very beautifully. The one thing that we didn’t find very interesting is the integrated keyboard, which sometimes gets little tricky to cope with, so just keep patient you’ll get it.

The app features 14 foreign languages and seems to work great in terms of user experience. The one thing which is lacking in the app is the availability of courses in one app, basically, it means that you have to install a separate app for each course if you want to do the advanced courses. Which is definitely not a very intruding feature. The app has premium features, which you have to purchase but mostly the app is free with a limited amount of exercises and courses. The best feature so far is the direct interaction with native speakers, which is absolutely fantastic. The app also lets you download the entire course offline.

Hello, Chinese is the most interactive and creative app out there. If you want to learn Chinese and additional regional language this is the best app. The App’s key focus is on understand Chinese and its Alphabets. It also teaches you to write Chinese by drawing it on the screen. The App has its own Chinese dictionary that keeps you Chinese vocabulary up to date.

The app is fun and easy learning; it almost feels like playing a small game. Speech recognition and Character handwriting technique are the most amazing feature we have ever seen in HelloChinese. Overall the courses are absolutely free, however, you may see some in-app purchases option.

Hope you like this list of top 5 free Best Language Learning Apps. We had a lot of fun trying these apps. It was hard to determine which one’s is the best between Memrise and Duolingo but we thought to stick with Doulingo. The App doesn’t just regurgitate you with some pre-written sentences or words, it also helps you understand preposition, noun, the use of adverbs and plurals. Which we didn’t found in Memrise or in any other free app out there. Busuu’s social interaction learning feature is still our favorite.

If we missed any App, please mention them below. Also feel free to share your view about these Apps in the comment section below. That’s all for this guys, stay tuned for next update.

Grammarly Review 2021 – Is Grammarly Premium Worth to Buy?

Is Grammarly Premium Worth to Buy? or Grammarly Free Version is Enough? Don't worry I will cover all your questions in "Grammarly Review". “I’m srue...
Read more
Technology Explains

‘The act of making the invisible visible.’ This one line sums up the extraordinary ability of the field of journalism. It defines something, a meaning,...
Read more

How to Start a Money Making Blog

There are a New One And the big mobile store

There is another and significant staggered showcasing organization on the scene. And it may very well change how numerous organizations work together later on—the big...
Read more

The parents want to protect their kids from anything and want to see where their kids are going and what they are watching on...
Read more

3 Lesser Know Benefits of a GPS Tracking App for Cars

If you run a fleet of two or more cars and want to enhance vehicle performance and safety, then exploring GPS tracking app for...
Read more

Hackers Targeting Healthcare Data in Droves: What You Need to Know

With the world facing a global healthcare crisis like nothing we’ve seen for a century as the COVID-19 pandemic continues to claim lives, you’d...
Read more

Pluralsight Flow – A Detailed Guide Before Making The Final Choice

Managing a team is indeed a really time-consuming procedure. You have to go through managing internal and external relationships, productivity, expectations from the upper...
Read more